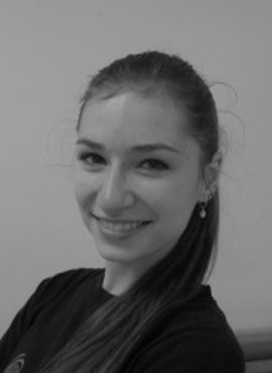 
Kristina is from the city of Ivano-Frankivsk, Ukraine, where she began her training in a choreographic school at the age of six.  At age 10, she began training in ballroom dance with "Suziriya". Between 2003 and 2009, Kristina won many dance competitions including the “All Ukrainian Festival of Show-Sport Dance”, the “All Ukrainian Festival and Competition of National Choreography in the Name of Pavlo Virsky”, the international children’s festival and competition "Misteriya Tantsyu", and other judged Ukrainian dance competitions including "Rhythm-Prestige", "Grace", "Gloria", and "Carmen". Kristina moved to the United States, and in 2009 was accepted into the Voloshky Ukrainian Dance Ensemble.  With Voloshky, Kristina danced in New York choreographer Mark Morris’ newly commissioned piece in collaboration with the Zoriany Dance Ensemble of Kirovohrad, Ukraine.