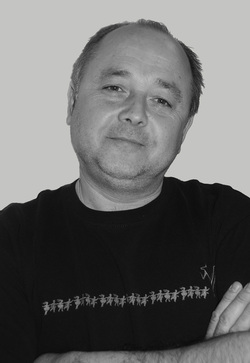 Oleh was born in Lviv, Ukraine, where his training began in the children’s school of Ukrainian folk dance at the Palace of Youth.  He was later accepted into Lviv’s prestigious ensemble “Yunist,” directed by Myroslav Vantukh, the current artistic director of Virsky.  During his university years at the Institute of Technology and Design in Kyiv, he danced in the group “Horlutsya,” directed by Yevhen Vasilievich Zaytsev, dean of the Institute of Culture.  Oleh’s leadership experience began in Kyiv when he was selected to be the director of the Institute’s Ukrainian folk ensemble.  After university, Oleh returned to Lviv where he danced and toured with the group “Halychyna,” performing in Europe, as well as the United States and Canada.

Oleh is married with two children, Ira and Yulia, who both danced in the Voloshky School, the Ensemble, as well as the Duquesne University Tamburitzans of Pittsburgh.